Let me explain. As I continue to cull my old photo files, I occasionally have to take a break and head out looking for new photo ops. That is hard at this time of year, as the wildlife is rather sparse.

However, we have been visited by a small group of swans for the last few weeks, including an immature one with the darker colours of the signet. So I have been trying to photograph them with varying degrees of success. The light on the water is tricky as it has either been cloudy or when the sun is out it has reflected too much on the surface.

However, not to be deterred, I headed out yesterday to find them and try one more time. I found them in the marsh rather than on the lake and set up to shoot them. The light wasn’t that bad so I got a lot of shots, resulting in a few that I liked. These are a few that I thought weren’t too bad. 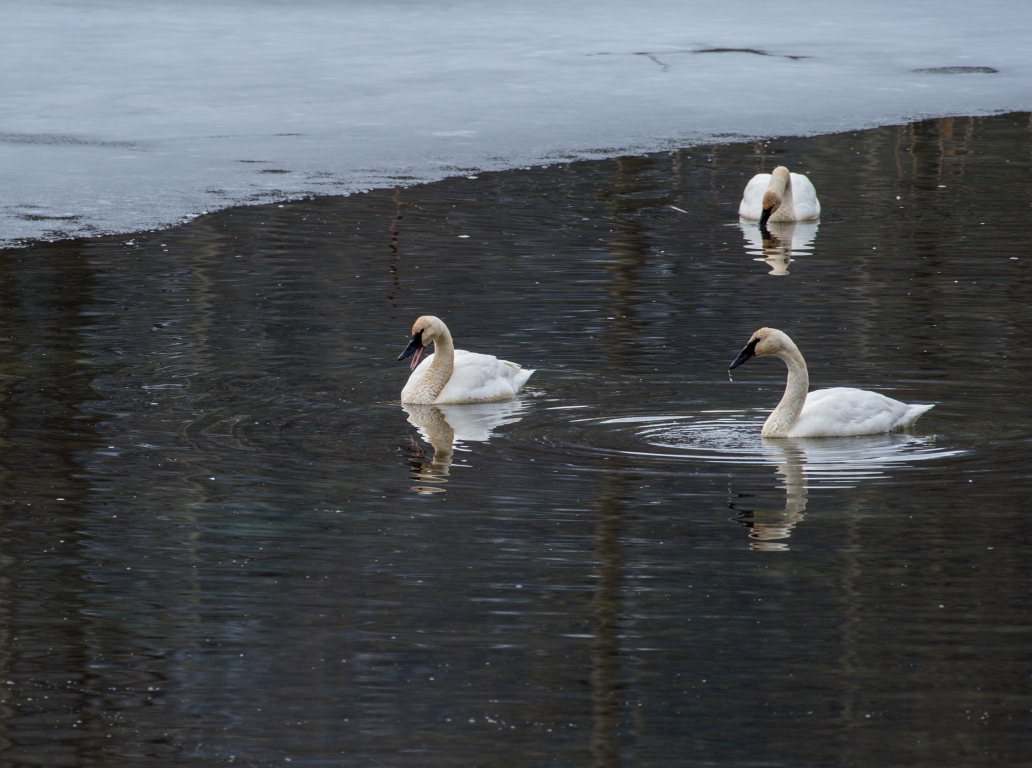 As I was working I noticed a dark shape on the ice to my left. Turning, I realized that an otter had come out to check its surroundings, or take a breather. Quickly I reoriented my body and camera and started photographing it. It turned out very shortly that I actually had two otters!!
They pop up through small holes in the ice and then drop back down, only to reappear out of another hole somewhere else. It reminds me of the game you could play on the fair grounds where the gopher head (not real) would pop up and you had to try and hit it with a mallet to win a prize.

Anyway, these two kept popping up and grooming or to eat a fish they had caught. And they were successful a lot with the fishing.

The fish were a good size! Then they would pause and groom, and groom, and groom. So, I decided to take the opportunity to do some landscape shots. But just as I got into that I heard a sound like cats fighting. That sort of screaming yowl! Quickly I swung the camera back to capture shots of the two otters fighting over a fish one of them had caught! It was so much fun watching them through the camera lens. Whoever thinks you miss things looking through a camera has never had the chance to watch something like this that is taking place about 100 meters away (or more as in this case).

Because they were so far away, and despite a long lens, the shots are still not as close as I would like (so not as big in the photos). However, here they are. Just overlook their deficiencies and enjoy. 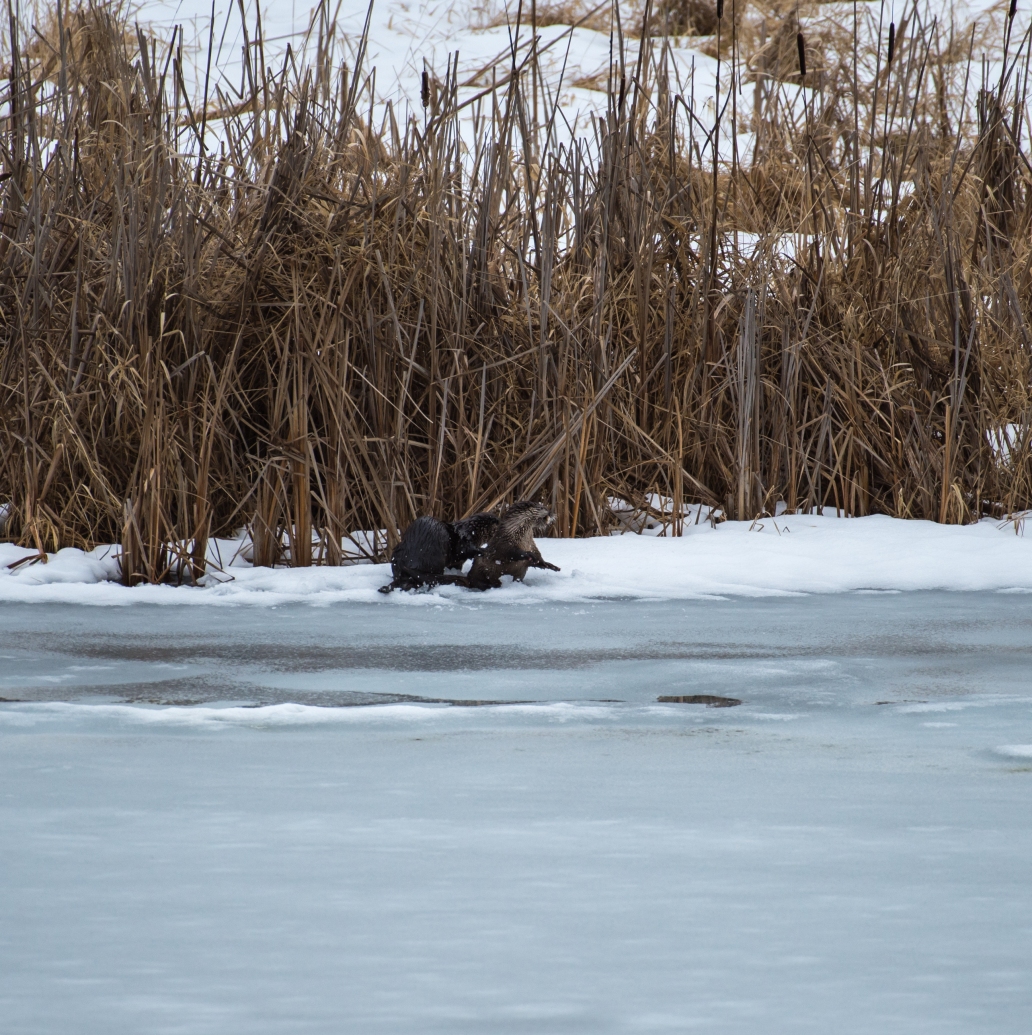 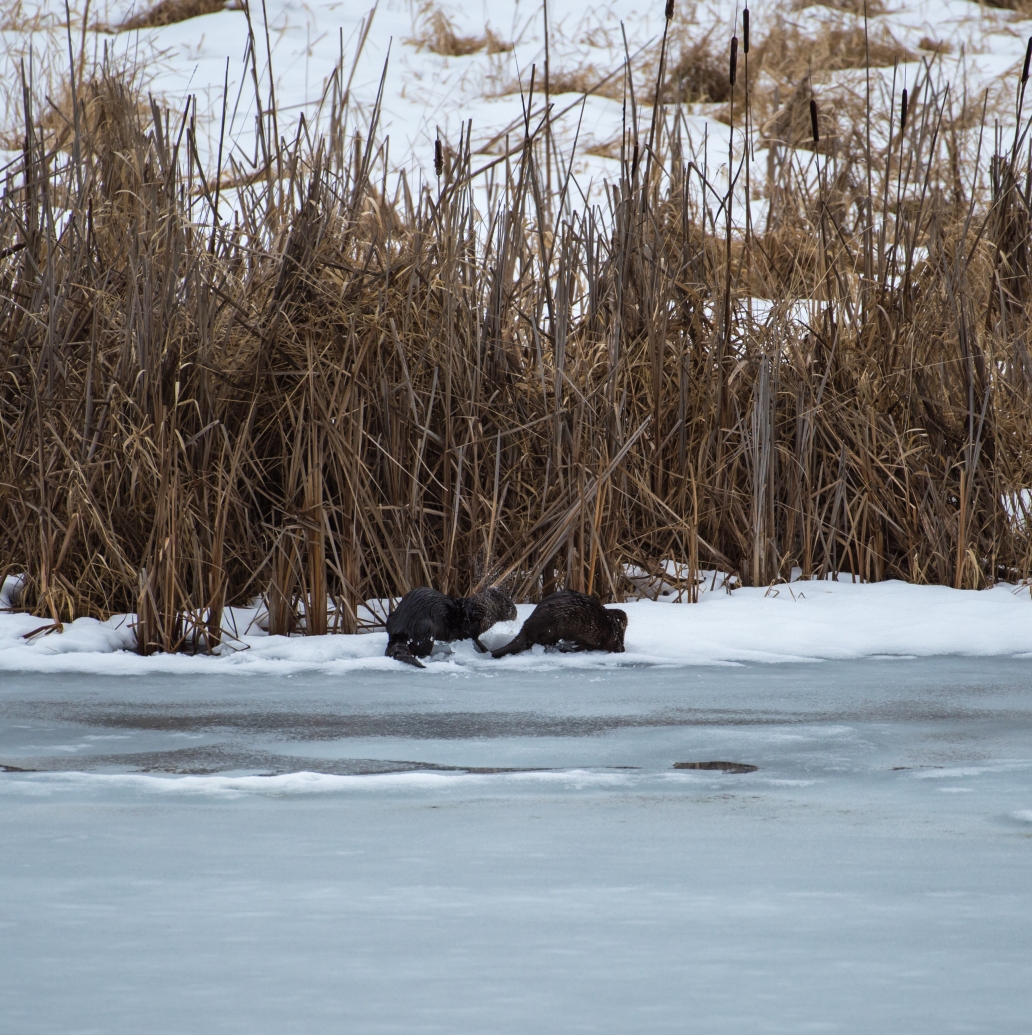 After that, things quieted down and they travelled, under the ice, to my side of the marsh but came up behind the bull rushes so I couldn’t get a great shot. Isn’t wildlife photography great?!?!

After that, back they went and came up for one last cute shot –